Posted on April 20, 2011 | 7 Comments
Last week I was on my iPhone checking Facebook, when I saw the following update from a friend of mine Gabriel O Josset, a.k.a. the “BilliardTraveler” on Twitter, stating he would be traveling to California for the first time:

I wrote back and told him I lived in California, and if he was coming to the San Francisco area we should meet up and shoot some pool.  Well, it turns out he was headed to Santa Cruz and San Francisco, and San Jose is halfway between the two…Bingo!  We made arrangements to meet at the California Billiard Club in Mountain View, CA last night.  I thought it would be a good idea for me to get there a little early so that I could welcome him when he arrived.  When I walked through the front door a little after 6pm, guess who was already there?  That’s right.  There he was at table 10, already locked in a battle with a local player.  We talked briefly, then I grabbed another table to wait for him to finish his match.

The view inside California Billiards

I was enjoying a drink and a light snack when Gabriel (Gabe) came over.  We talked pool for a little while, then decided it was time to play.  Little did I know I was in for a real treat, more like a veritable billiard education.  We wanted to start on the three cushion table to play some arcane game called ‘Five Pin’, but someone got to the 3 cushion table before us, so we decided to start the evening on a pool table instead.

The first game we played was 10 ball, but we changed the rules a little.  Usually when I play 10 ball, I play using standard 9 ball rules.  Not last night!  We played 10 ball with every shot being a called shot, but if you failed to make your called shot, your opponent had the option to take his normal turn or he could opt to make you take the shot.  That made the game a lot more interesting, and greatly reduced the ‘luck’ factor.  The only downside is that you couldn’t play ‘two way’ shots for fear the other player would make you shoot out of the safe.  We played a few games of 10 ball, then switched to One Pocket.  I’ve only played One Pocket once or twice in my life, but it’s a fascinating game and I wanted to learn it.  Gabe explained the rules and provided some guidance on the best strategies for success, and then we were off.

After a few games of One Pocket, the billiard table opened up, and we quickly moved over to secure our place at the table.  Gabe whipped out a plastic bag filled with goodies and informed me that he would teach me a new game…Five Pin.  Five Pin is played on a three cushion billiard table.  The object is, of course, to score points.  One player has the white ball, the other the yellow ball.  In the middle of the table are 5 pins: 1 red pin surrounded by 4 white pins.  The pins look like miniature bowling pins.  On each shot you must send your cue ball into your opponent’s ball first to make a legal hit.  After making a legal hit, here’s how you can score points (if I remember this correctly):

We played several games of five pin.  At first I was confused, but hey, that’s nothing new!  Oh, by the way, in our very first game Gabe took the opening shot…it was a 1 rail kick shot into my cue ball.  My ball then bounced off another rail, passed directly through the cluster of pins in the middle of the table, and knocked down the red pin while leaving all 4 white pins undisturbed!  8 points!  Holy Cow!  I eventually got the hang of it and really enjoyed the game even though Gabe was obviously much more talented and experienced than me.  He took pity on me and let me win the final game…what a great guest!  😉   I was amazed at some of the position play and 3 cushion shots that he made.  “Oh, that’s nothing,” he said.  “You should see Jan play!”  I think I can safely say that I’m the only regular at California Billiards who has ever played Five Pin at California Billiards.

After Five Pin, we played three cushion billiards.  Three cushion is another game I want to learn, and Gabe was willing to teach me a few things.  Gabe thoroughly dominated, but with his guidance I was FINALLY able to score a point.  In fact, I ALMOST made two in a row.  😉  Nope, I’m no Sang Lee.  Here’s Gabe contemplating his next move on the billiard table. 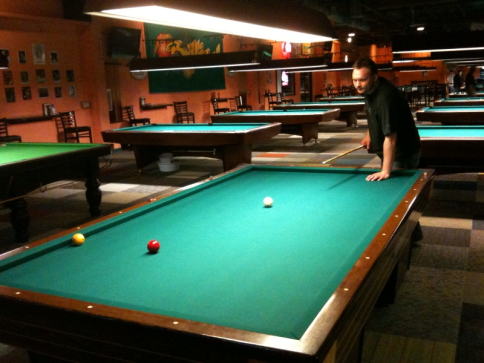 To wrap up the evening, we played a few more games of One Pocket.  I’m definitely going to stick with One Pocket.  It’s a fascinating game that really makes you think.  Here’s a final picture of Gabe pondering his options in one of our One Pocket games.  We had a great time shooting pool.  What a cool job he has – being able to travel around the world and play all of the many variations of pool that exist.  You can follow his latest adventures on his website and on twitter.

The Billiard Traveler plays One Pocket too!